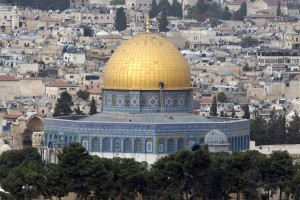 The Al-Aqsa Mosque in Jerusalem did not exist at the time of Prophet Mohammad. The claims of Muslims of sacred ground where Al-Aqsa Mosque presently sits cannot be substantiated from the Quran.

PROPHET MOHAMMAD’S NIGHT JOURNEY TO THE FARTHEST PLACE OF PROSTRATION

[17:1]  Most glorified is the One who summoned His servant (Muhammad) during the night, from the Sacred Masjid (of Mecca) to the farthest place of prostration, whose surroundings we have blessed, in order to show him some of our signs. He is the Hearer, the Seer.

*53:1-18 Muhammad was summoned to the highest universe to receive this Quran into his heart. The stars fell away as he traveled through them at millions of times the speed of light. Subsequently, the Quran was gradually released to his memory.

QURAN REVEALED ON THAT BLESSED NIGHT

MUSLIM CLAIMS BASED ON HADITH

The story tellers and Hadith writers fabricated a story of Prophet Mohammad  riding on a horse and travelling to Al-Aqsa Mosque (in Jerusalem),  praying there and journeying on (“at the speed of light”) to Heaven where he negotiated the number of prayers with God. Needless to say none of this has any truth and none of this story has any support in the Quran.

Pilgrimage or Hajj maybe performed anytime during a four month period. Saudi Arabia restricts it to once a year resulting in major tragedies. This is the result of not following God’s law. It is God’s law that if you put your hand in fire, it will burn and hurt immensely.  So too is the result of discarding God’s law that pilgrimage or Hajj may be observed anytime during a four month time frame. By restricting Hajj to once a year the Saudi authorities invite tragedies such as the stampede this year.

[2:197]  Hajj shall be observed in the specified months. Whoever sets out to observe Hajj shall refrain from sexual intercourse, misconduct, and arguments throughout Hajj. Whatever good you do, GOD is fully aware thereof. As you prepare your provisions for the journey, the best provision is righteousness. You shall observe Me, O you who possess intelligence.

*2:197 Hajj can be observed any time during the Sacred Months: Zul-Hijjah, Muharram, Safar, and Rabi I.

[9:36]  The count of months, as far as GOD is concerned, is twelve. This has been GOD’s law, since the day He created the heavens and the earth. Four of them are sacred. This is the perfect religion; you shall not wrong your souls (by fighting) during the Sacred Months. However, you may declare all-out war against the idol worshipers (even during the Sacred Months), when they declare all-out war against you, and know that GOD is on the side of the righteous.